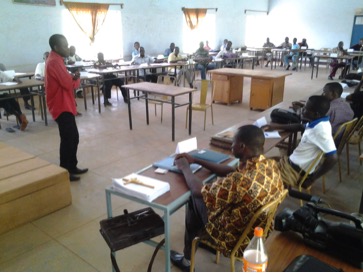 Since 2007, the seminarians of two Major Seminaries in Burkina Faso are trained in communications. Last April, a group of 51 future priests, at St John the Baptist seminary, in Ouagadougou,  followed an intensive session covering many aspects going from communication theories, to relations between Church and media, crisis management, development of personal creativity and talents, technics of interview in front of a camera. They even discussed the controversial film The Crime of Father Amaro.

The session was conducted by Fr. Pierre Sanou, secretary of the Episcopal commission for social communications, by Fr. Jean-Baptiste Traoré, and by Fr. Augustin Ouedraogo, all three being also directors of Catholic radio stations. The programme of the session followed the CREC methodology.

Although an intense heat reigned in this period of April and the participants were hardly worried by the writing of their master’s thesis, the session took place in an excellent atmosphere of work and warmheartedness.

At the end of the session, the rector of the Major Seminary, Fr. Jules Pascal, expressed its gratitude for this collaboration between the commission for social communications and CREC. The trainers wished that the session could be held in the future during the second quarter and that they could use more equipments: video-projector, camera…

Based on a report by Fr. Pierre Sanou