Workshop in Tanzania: A Mountain of Trust 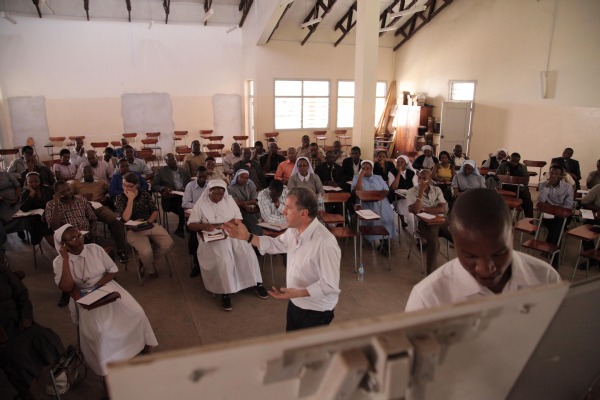 It rains a lot on Mount Kilimanjaro in June. And it rains hard. Most of the time you can’t see the mountain because its snow-capped summit is so high it rises above the cloud line – something that makes this dormant volcano even more mysterious.

There’s also something mysterious about the fact that the highest mountain in Africa is home to one of the continent’s youngest centres of learning. Mwenge Catholic University, near Moshi in Tanzania, rises (literally) on the slopes of Mount Kilimanjaro.Maybe that’s why its slogan is: “Reaching for new heights”!

The University is certainly growing exponentially in terms of student enrolment and prestige. This is partly because of the great variety of courses it offers (from the sciences to the arts) but mostly because of its holistic approach to education which (in the words of its mission statement) aims at preparing both “competent professionals” and “socially responsible citizens” who are “committed to working for the benefit of the people of Tanzania and beyond”.

Mwenge University also leads by example and its academic faculty includes some of the most competent professionals in their field. So when the Vice Chancellor invited me, on behalf of CREC, to provide a 3-day communications workshop to nearly 100 members of the university’s academic and administrative staff, I felt thoroughly intimidated: for the first time in my teaching career, every one of my students was more highly qualified than I am.

Fortunately for me, Tanzania is still one of the most welcoming places on earth – one of the few places where you are still valued for who you are, rather than for what you know. That’s also one of the reasons why the session was such a success. Informality quickly became the catch-word as participants struggled openly with the personal challenges of becoming effective communicators. Working together or in small groups (and ably assisted by my son-and-systems-manager, Demian), professors and professionals transformed themselves into pupils and apprentices.

The result was a surprising discovery: the biggest obstacle to effective communication, both horizontally (staff-to-staff) and vertically (staff-to-students), turned out to be…lack of trust. Trust is certainly not an issue that’s specific to Mwenge University. It’s at the heart of every relationship. It’s the key to every form of communication that empowers rather than enslaves. But it takes courage to admit it’s an issue – and it takes commitment to confront it.

On the slopes of Mount Kilimanjaro, they are doing both.